THE POETRY OF MINIATURES


"Sometimes the smallest things take up the most room in your heart".  Winnie the Pooh

How wonderful is it to stumble upon a item of tiny perfection?  Any miniature collector knows just what I mean.  It's that moment when you discover the quintessential representation of maybe even a common everyday item replicated in diminutive form.  And somehow it takes your breath away.  Here is a recent one of mine snagged on ebay for a song.  How the whole world missed it I have no idea. The stars were shining on me that day.

Not everyone gets this.

Maybe because they are too busy to stop and notice something that small and that perfect.  It takes a special sort I guess and I am one.  This tiny tea set is wheel thrown clay with a lovely, earthy green glaze.  The pots have perfect fitting lids and the tiny cups and saucers are the true and perfect 1:12 scale.  If you did not see the lemon in the photo, you would not know it is miniature.  It came from the UK and I wish I knew the artist. 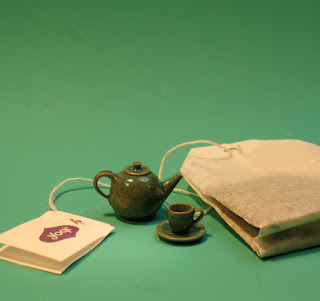 This is Realism in Miniature.

At it's best.  And to happen upon just the most perfect tiny thing is a huge part of being a miniature collector.  It's the thrill of the hunt.  The discovery of, until that very moment, exactly what you wanted.  It might not even be something you were actually looking for but you know when you see it it has to be yours. 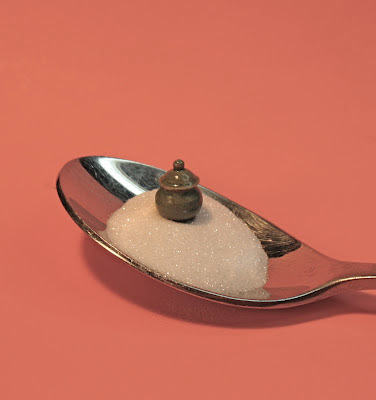 It's poetry you can touch.

The perfect miniature piece or setting or diorama can evoke a feeling or emotion just like a poem.  They are lovely little bits of art to me and many and I think the world needs to stop and have a better look. 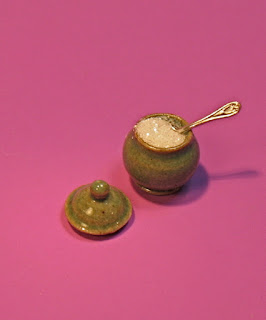 I subscribe to a poem a day newsletter by Samantha Reynolds  and a recent one reminded me of miniatures.  With all due respect to Samantha, if I plug in 'miniatures' for 'poetry', you'll see what I mean.  And I thank Samantha for that.  I think she just might agree that in this case, they interchange.


The Dharma of Poetry

Poetry isn’t meant to educate you
or make you laugh
it isn’t meant to motivate you
improve you
or mend
your heart
it might do it all anyways
poetry is like that
ambitious
for a little guy
but it isn’t the rumble
in the centre
of it all
every time letters are stitched together
into a poem
it is simply
a polite request
to obliterate the fog
that tricks you
into numbness
look
look
there are a thousand ways
to see each simple thing
an eternity
of newness
with each blink.

Tell me your miniature 'poem'.  What's the perfect tiny thing for you?
Posted by Patricia Paul at 7:24 PM 9 comments:

"The only art I'll ever study is stuff that I can steal from." David Bowie

Recently I came upon a neat little book called, Steal Like An Artist by Auston Kelon.   Auston maintains that nothing is original and what a good artist understands is that nothing comes from nowhere.

He's got a lot of great quotes in the book too, like this one:

"Immature poets imitate;
Mature poets steal; bad
poets deface what they take,
and good poets make it into
something better, or at least
something different.  The
good poet welds his theft into
a whole of feeling which is
unique, utterly different from
that from which it was torn."   T.S. Eliot

You could substitute 'miniature artisan' for poet there and that would explain a lot.

"Those who do not want to imitate anything, produce nothing."  Salvador Dali

So as a miniature maker the game is pretty much to imitate real life in miniature.  We all do that and probably for that very reason  - to create a world we'd love to see or be in or own.  I ripped this out of a magazine years ago with the intention of one day doing it in miniature. I can't remember the magazine now but hope the shout out to "Patina' makes up for slapping it here without permission. I finally found a Bespaq cabinet that seemed to suit the design. I had to replace the glass with wood panels but in the end my copied design suits the miniature piece. It's not exact but I did steal the original style of the real size piece.

And then.
I followed through with a chair to match this is now an original piece but I still used the swiped design.

There's more.
Lots of people really enjoy this next style - which is obvious, but I won't mention their name.  They are very touchy and think they invented black and white checkerboard.
This style has been copied in miniature over and over again - expertly and poorly.  I put my pilfered design on another Bespaq piece that has been seriously bashed and you probably wouldn't recognize it. Oh, and yes, the plates are in the same style. I did not think to take a photo of the original but maybe I can steal one.  But that would really be stealing.  Taking photos and plopping them in your stuff without permission is not nice.  Kinda like what I did with the magazine clipping. What could I do? I'm proving a point.

There are of course those among us who really do steal.  I have seen my own things copied other places.  Things like my dressed skeletons.  I did not think up dressed skeletons.  You can find them in real life in some awful places. Dead and still in their clothes. But I had them in 'original' poses.  Like this one.

I later saw it ripped off on eBay.  And of course, neither one of us originated the monkeys from which this came. And hey, those you see everywhere.

Some people hang out on other people's websites and copy everything they see. Exactly.

Sometimes you see something unique and then you see it again and again.

"We are shaped and fashioned by what we love." Goethe

I have in fact copied full sized original pieces line for line in miniature.  But they were antiques and that would, I think, make them in the public domain.  I am for sure not the only one.  Some of the most sought after pieces are things in miniature based on real stuff that people just need - to evoke a feeling - and in miniature that would be totally unique and 'utterly different'.  I think.

" Bottom line is, is you don't need it, it's clutter and it needs to go" ~ Charisse Ward

Yes, it is time to purge my hoard of miniature bits and pieces that I have overly collected.  I have been doing this for some time now and still have quite the stockpile. At some point in my miniature creating career I started doing 'assemblages' of things.  That required me to acquire a s**t bunch of stuff in case I might need it the next time one of these projects called me.  So every odd and cheap little thing went into the pile.  I could use this for that and that for this.  Well, you see.  The table below came out of the stash of stuff.


I'm not calling myself a hoarder, but...
This kind of thing can get out of hand.  Its hard to stop, like chips.  In the end I just have too much and I need to weed it out.  It distracts.  It beckons. It keeps me from the hundred other projects in my head.  Lately I have been pulling it out piece by piece and turning it into something else.  My problem is that when I come across a pile of stuff that I am willing to part with I start fiddling with it until it becomes something else.

An inexpensive metal tea set that came out of a lot of miniatures that I won on eBay became this spooky, ghostly tea set magically pouring itself.  I have done many of these in the past in different variations and every witch needs a set like this.  This reminds me of the enchanted muggle things in the Harry Potter books.

This commercial and not very pretty chair became this one of a kind piece for a 'haunted' place.  It was awesomely fun to do because I sculpted a ghastly face onto the wood of the chair and then painted the spooky tree on pale gray silk for the upholstery.  And I found out that I LOVE painting on fabric. So another thing on my list...
Not every thing turns into a spooky thing - but mostly - because that seems to be a favorite of mine as well as collectors.  I still have a long way to go. 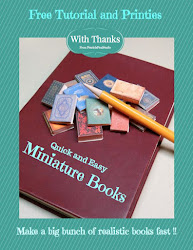 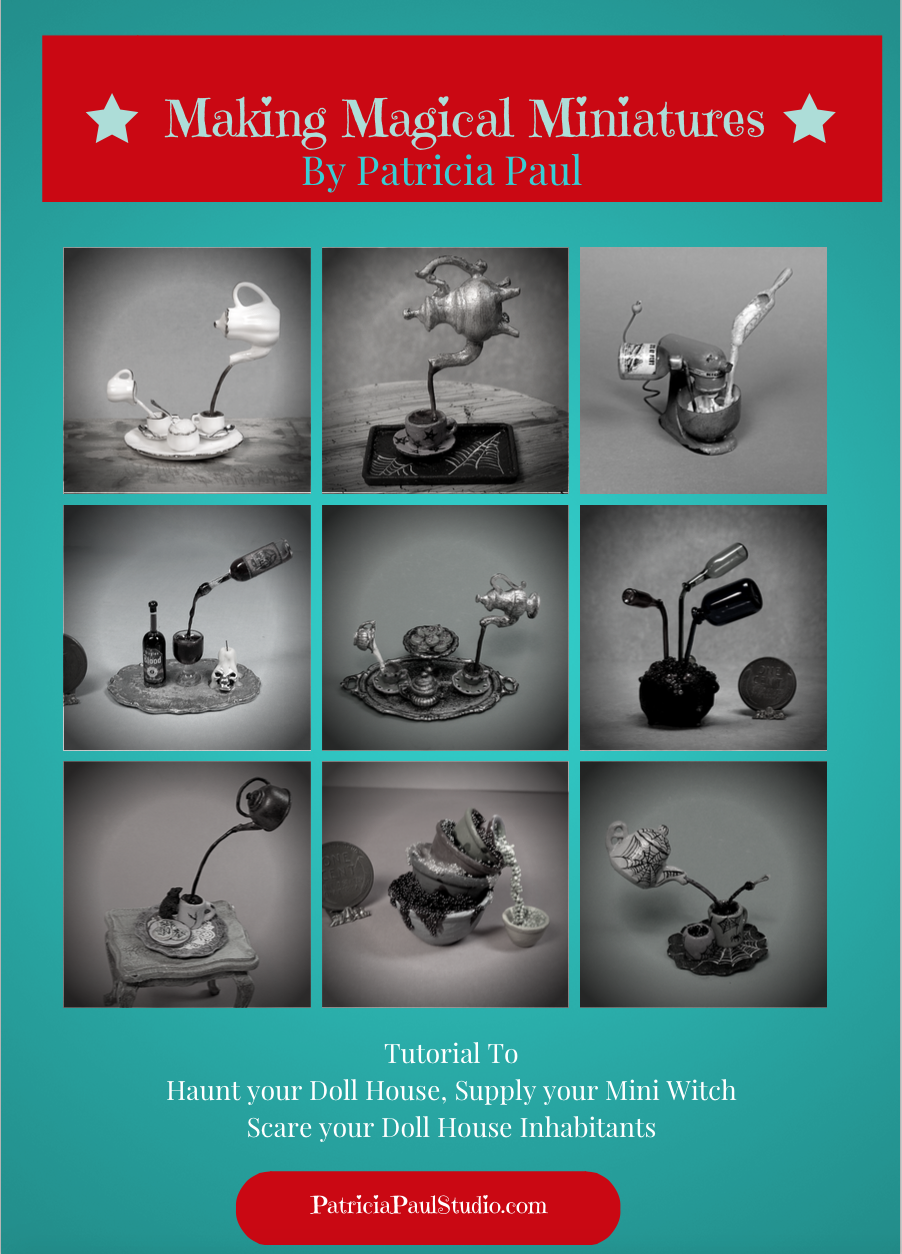 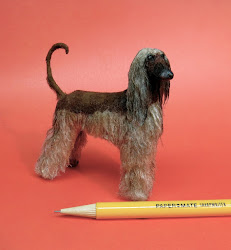 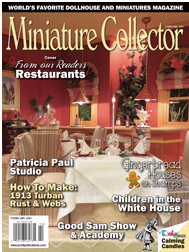 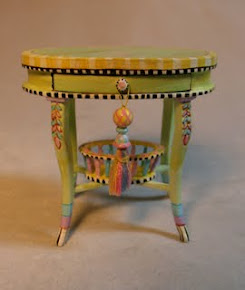